The Fitwell Backcountry AT mountaineering boot is the ultimate splitboarding boot, but is it something you need as a splitboarder?  Is it worth the expensive cost, or will your everyday snowboard boots fit the bill?  We at SplitboardReviews.com had a chance to try out the Fitwell Backcountry boot firsthand in many different environments and terrain.

Let’s be realistic, currently, there are only a few Splitboard specific snowboard boots on the market. Deeluxe makes a few, and then there are the Fitwell Backcountry boots.  Without going to a hard boot setup, these are really your choices for a soft splitboard boot.  Deeluxe boots range from about $380 to $550.  The Fitwell boot rings in at $635. So if you are in the market for a soft boot that can wear a crampon is the Fitwell boot a good option.

The Fitwell Backcountry boot is a top-notch contender in the backcountry.  For boot packing, verts, crampons, snowshoes, the stiffness improved performance when trekking and increased confidence.  We were able to try the boots in a variety of conditions and the boot performed very well in the backcountry, and not so well in the resort.  Keep reading for our full review of the Fitwell Backcountry Splitboard Boot.

Pulling the boots out of the box, I was surprised at how light they felt for a mountaineering splitboard boot. I was expecting something overweight and over built, to stand up to the demands of rock, crampon, and human daily abuse.

The zebra print rubber was not a fan favorite for us.  We wish there were other color options, or that the zebra print was dropped altogether. Even if it was just black, the overall look of the boots is very nice.

The build quality seemed impeccable at first glance.  The quality of the boot is visible right away.  The shape, materials, all are right in line with a boot that a demanding rider would look for out of the box. 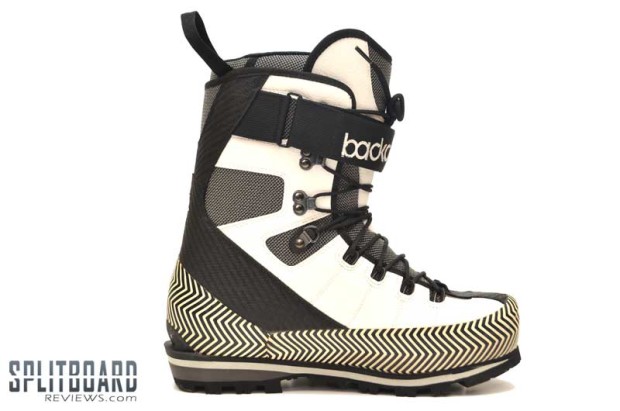 I am a size 10.5 US and wore the size 290 (which is about equivalent to a size 11).  I was surprised when I put them on to feel my toe at the end of the boot, with only one single thin sock on.  Granted these were brand new boots and should pack out some, but I would recommend rounding up in size.  We love the shape of the boot too, the toes are narrow, perfect for billy goating up rocks and getting the boot into tighter spots, however, this did impede toe movement in the boot, which can assist in keeping toes from falling asleep on long tours.  I was blessed with some extremely flat feet which are fairly wide but didn’t have any problems with the width of the boot or liner.

The liners are great, in fact, they might make some nice slippers around the house.  The detail and comfort of the boots compete with any high-end snowboard boot I have tried.  A lot of the boot stiffness comes from the heel to upper as you can see by the black lateral running up the outside of the lining.  However, the balls of the liner remain very soft and flexible, making this boot great for touring and boot packing. 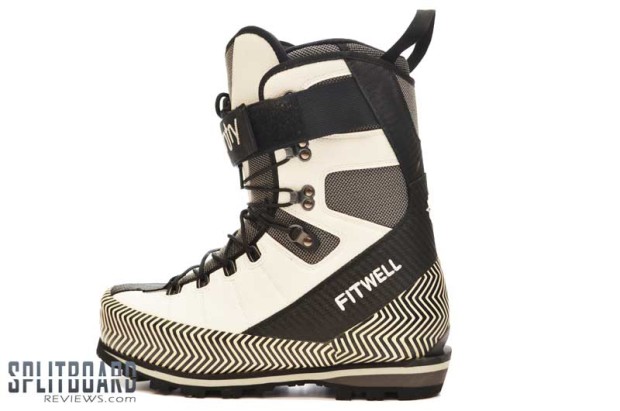 This might be the main reason some buy the Fitwell backcountry boot.  With the Vibram sole and tread pattern, as well as the ability to use a semi-automatic crampon, this is something you just can’t do with a normal snowboard boot.

The sole of the boot is very riding, to perform well with a crampon, and would be expected in an alpine boot. the sole also has a great “work boot” lug pattern type shape to it that makes walking and hiking in it much more pleasant than traditional snowboard boots. 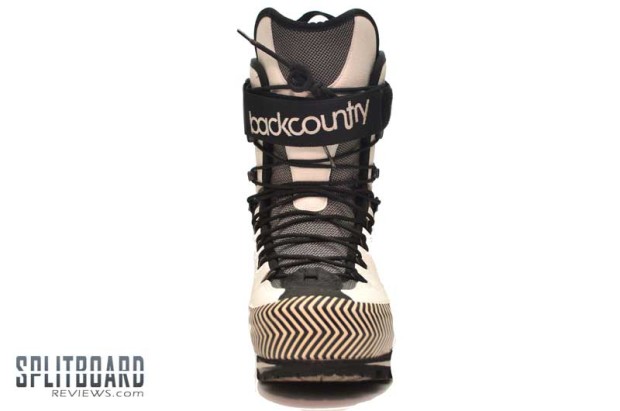 The Fitwell backcountry boot has been in development for a few years now.  Developed in Italy by Fitwell, a well-known boot manufacture started in the 1980s designed to feed the high altitude enthusiast with boots that meet more demands than a normal boot.  A stiffer boot that offers more lateral support and confidence in climbing than a traditional snowboard boot 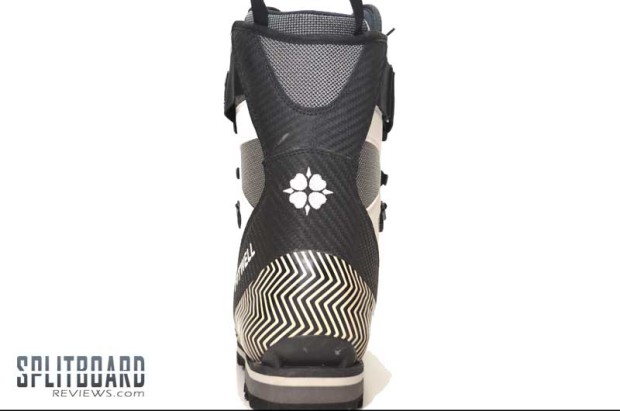 Touring in the Fitwell splitboard boot is a dream.  Again, the lateral support is a huge confidence booster when touring in sketchy situations.  Kickturns are easier to maneuver because of the additional support and the ability to kick the ski back when breaking the apex of the direction in the turn.

The natural forward lean of the boot combines  the Vibram Carrarmato Sole, which is shaped very nicely to roll with the steps better than any other snowboard boot (which are typically mostly flat bottomed). Having a more traditional tread vs a smaller tread which often appears on snowboard boots is a must for backcountry boots. 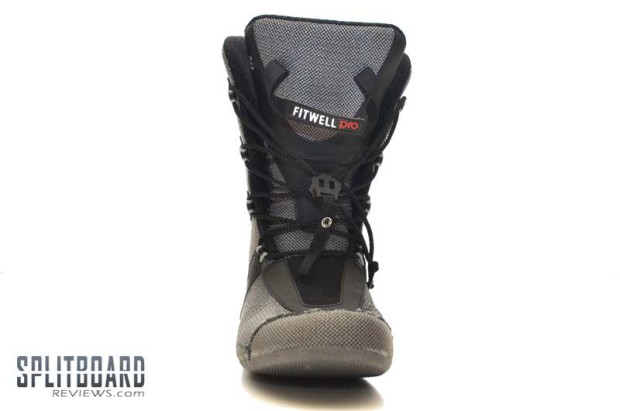 One of our biggest complaints about the Fitwell Backcountry boot is the lacing system.  With so many advanced lacing systems on the market that take the hassle and rope burn out of traditional lace boots for this high end of a snowboard boot, we would have hoped to see something more innovative.  With the stiffness of the boots and liner, it’s very hard to get a tight pull.  The upper ankle strap does help with this and helps keep the laces from attracting snowballs.  With the traditional lacing, we notice that the laces quickly because loose and needed to be re-secured after a short time.

The heel of the lacing system does offer a nice feature of locking the lowers down while stringing the upper boot.  However, it locks them really good and I had a couple of times where they were difficult with cold hands to free.

The liners lacing are conventional and just worked great for securing the liner to the foot. 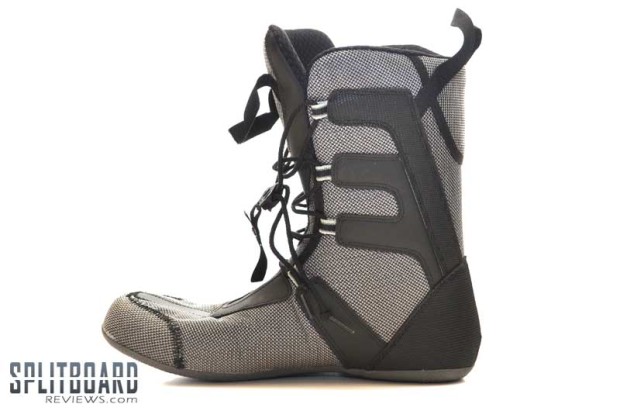 I was a little worried about how the Backcountry boot would fit into my Spark R & D Magnetos.  Without any adjustments to the bindings from my previous size 10.5 boots, the Fitwell boot fit in perfectly and the binding held great.  In tour mode, the boot performed equally as well providing a stiff and secure bond to the ski.  With the zebra rubber toe and heel caps and the grippy foxing op the back of the boot, it literally locks into the bindings. 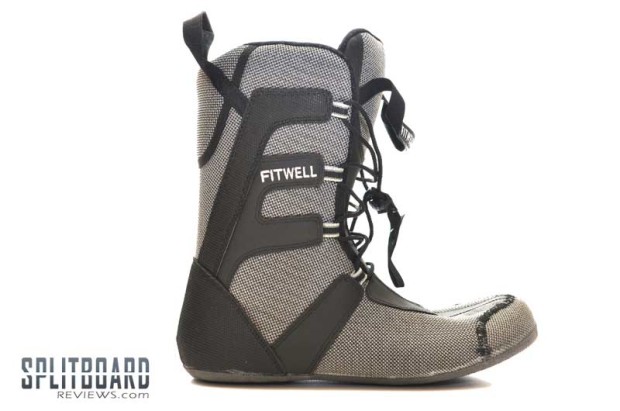 We had to try the Fitwell boots at a resort and on piste.  These boots are very stiff, charging down chopping runs, and feeling the control come from the boots more than from the board was a different feeling. However, the stiffness became pretty uncomfortable by the end of the day.  It was nice to get a large amount of riding time on the boot using the lift as access, but I would not recommend these boots for resort riding. 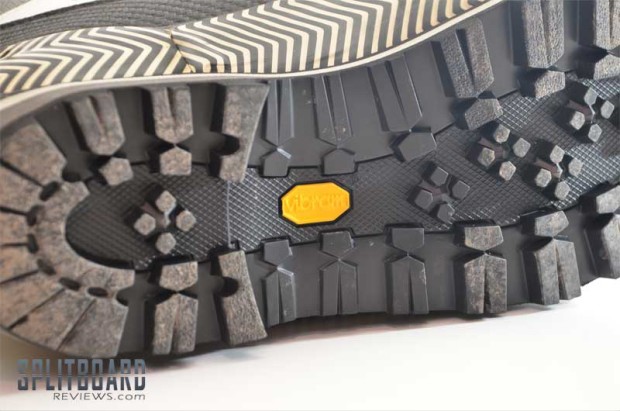 We spent a few days with the backcountry boot and have many great things to say about them.  When asked, our first point out would be that the boot gave us more confidence all around with its solid platform.  When hiking in tricky terrain, or charging the chop, they just felt extremely stable, and translate into touring and riding stability.  In icy conditions with crampons on ski, it felt much easier to dig the ski in with these boots.  In some ways you could feel the stability all the way down to the skins, making it a much more confident assent.  The boots did retain more moisture than I’d hoped with no way for melting snow to exit the lacing system.

Overall, for any serious splitboarder these are highly recommended upgrades from a typical snowboard boot.  Even the stiffest of snowboard boots don’t compare to the confidence boost of a mountaineering splitboard boot.

The build quality of the boot and materials justify the cost. It may be too soon to know the longevity of the boot, but I’m sure well into the 200 days these boots would still be going strong.